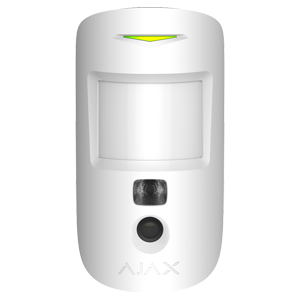 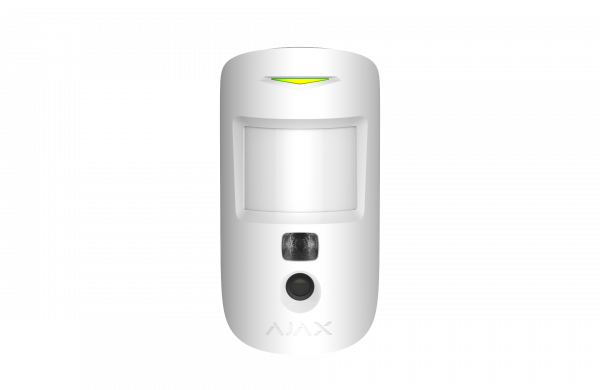 MotionCam is a wireless motion detector with visual alarm verification for indoor use. It operates for up to 3 years on bundled batteries, detects movement at up to 12 meters, ignores animals, but recognizes a human move instantly. MotionCam works within Ajax security systems, connecting to a hub through the two secure radio protocols. The detector uses Jeweller to transmit alarms and events, and Wings to transmit photos. Wireless coverage may reach up 1,700 m line-of-sight.
PLEASE NOTE: The detector is compatible only with Hub 2. Connection to Hub, Hub Plus, ReX radio signal range extender, ocBridge Plus and uartBridge integration modules is not supported!

The detector is configured via iOS, Android, macOS, and Windows-based Ajax apps. Users are alerted of all alarms and events via push notifications, SMS, and calls (if enabled).

The Ajax security system can be used for self-reliant monitoring, or can be connected to a security company’s central monitoring station.

The infrared sensor of MotionCam detects intrusion into the secured premises by identifying moving objects with a temperature close to that of the human body. The temperature compensation function makes the detector effective inside premises with temperature ranging from 0 to +40°C. If placed and adjusted properly, MotionCam ignores pets.

When movement is detected, the armed detector instantly transmits an alarm signal to the hub. The hub activates the connected sirens and notifies the user and the security company. MotionCam uses Jeweller radio protocol to transmit alarms and events to the hub.

The built-in MotionCam camera can take from 1 to 5 shots with the resolution of 320×240 and up to 3 shots with the resolution of 640×480 pixels. A series of photos is displayed in the app as an animation, so the user is able to evaluate the unfolding of the event over time. Photos are available both in Ajax apps and on the Central Monitoring Station software of the security company. MotionCam uses Wings radio protocol to transmit photos to the hub.